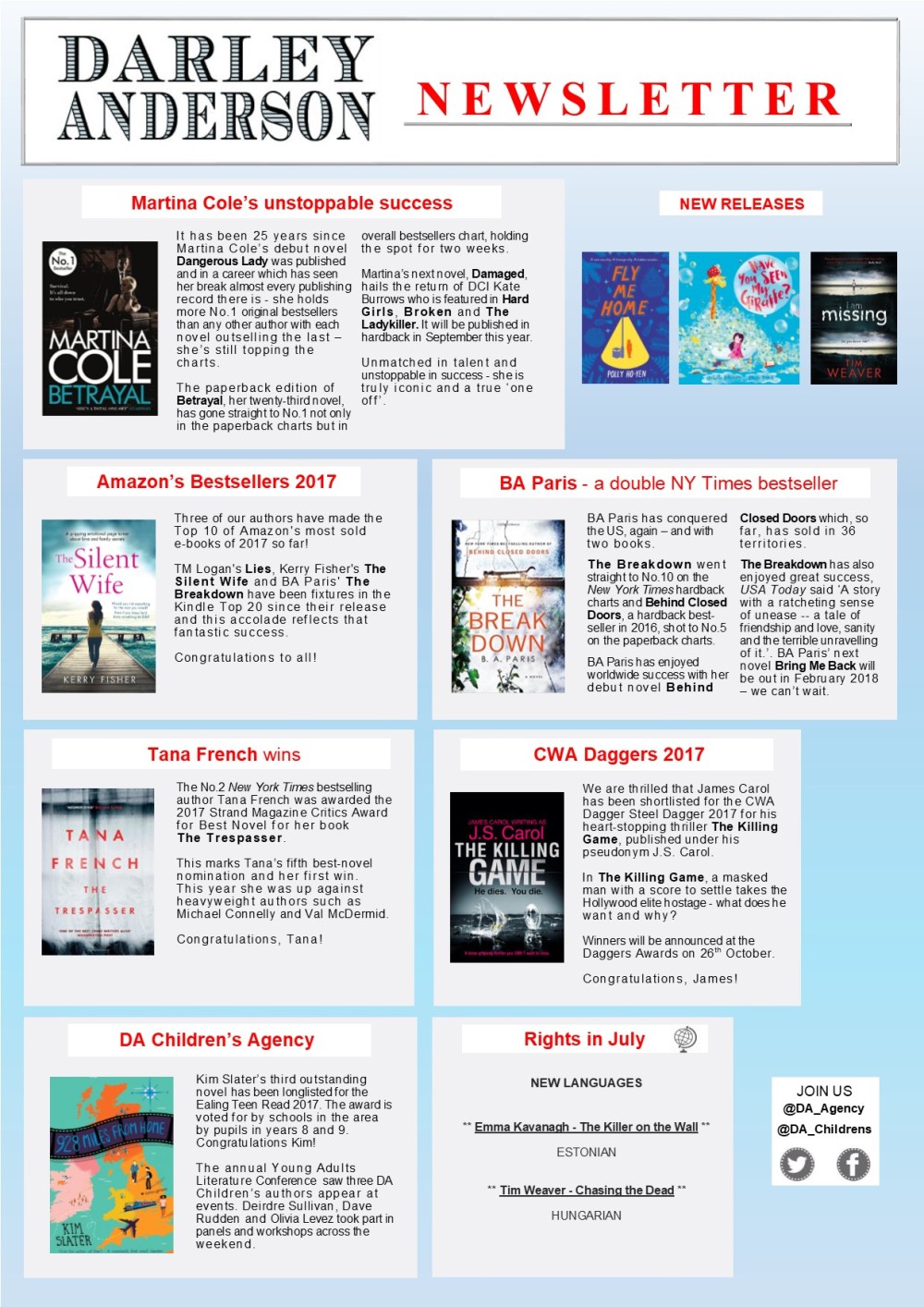 It has been 25 years since Martina Cole’s debut novel

Dangerous Lady was published and in a career which has seen her break almost every publishing record there is – she holds more No.1 original bestsellers than any other author with each novel outselling the last – she’s still topping the charts.

The paperback edition of Betrayal, her twenty-third novel, has gone straight to No.1 not only in the paperback charts but in overall bestsellers chart, holding the spot for two weeks.

Martina’s next novel, Damaged, hails the return of DCI Kate Burrows who is featured in Hard Girls, Broken and The Ladykiller. It will be published in hardback in September this year.

Unmatched in talent and unstoppable in success – she is truly iconic and a true ‘one off’.

Three of our authors have made the Top 10 of Amazon’s most sold e-books of 2017 so far!

TM Logan’s Lies, Kerry Fisher’s The Silent Wife and BA Paris’ The Breakdown have been fixtures in the Kindle Top 20 since their release and this accolade reflects that fantastic success.

BA Paris has conquered the US, again – and with two books.

The Breakdown went straight to No.10 on the New York Times hardback charts and Behind Closed Doors, a hardback bestseller in 2016, shot to No.5 on the paperback charts.

BA Paris has enjoyed worldwide success with her debut novel Behind Closed Doors which, so far, has sold in 36 territories.

The Breakdown has also enjoyed great success, USA Today said ‘A story with a ratcheting sense of unease — a tale of friendship and love, sanity and the terrible unravelling of it.’. BA Paris’ next novel Bring Me Back will be out in February 2018 – we can’t wait.

The No.2 New York Times bestselling author Tana French was awarded the 2017 Strand Magazine Critics Award for Best Novel for her book The Trespasser.

This marks Tana’s fifth best-novel nomination and her first win.

This year she was up against heavyweight authors such as Michael Connelly and Val McDermid.

We are thrilled that James Carol has been shortlisted for the CWA Dagger Steel Dagger 2017 for his heart-stopping thriller The Killing Game, published under his pseudonym J.S. Carol.

In The Killing Game, a masked man with a score to settle takes the Hollywood elite hostage – what does he want and why?

Winners will be announced at the Daggers Awards on 26th October.

Kim Slater’s third outstanding novel has been longlisted for the Ealing Teen Read 2017. The award is voted for by schools in the area by pupils in years 8 and 9.