A criminal psychologist for several years, Chris Carter has worked over 100 cases involving serial killers, murderers and dangerous offenders. The Sunday Times bestselling author stopped by the blog to tell us about the new Robert Hunter thriller, The Death Sculptor.

For those few who don’t know yet, can you tell us a bit about Robert Hunter and The Death Sculptor?

Robert Hunter is a detective for the Special Section of the Robbery Homicide Division of the Los Angeles Police Department.  The Special Section was created to deal solely with high-profile, serial killer, and homicide cases that require extensive investigative time and expertise.  Hunter and his partner, Carlos Garcia, are actually part of an even more exclusive unit inside the Special Section – the UVC unit (Ultra Violent Crimes).  These are crimes where the perpetrator has used excessive brutality and/or sadism against his or her victims.

In The Death Sculptor, Hunter and Garcia are faced with exactly that – a new serial killer whose cruelty and sadism achieve new heights.  But the brutality of the crimes isn’t the only thing that shocks and baffles Hunter and Garcia.  This killer also leaves behind a “calling card” of sorts.  Some kind of puzzle, which is like nothing anyone has ever seen before. 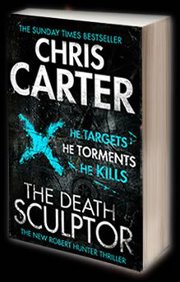 Hunter attracts a lot of female attention. What is it about Hunter that the ladies find so hard to resist?

I really wish I knew, because I wouldn’t mind having some.

You receive a lot of fan mail from your readers, how do you respond? And do you think that some of your fans confuse you with the character of Hunter?

I reply to every email I receive, and I always try to answer every question they pose, in the best way I can.

Yes, some readers do project the figure of a book’s main character onto the book’s author.  That has, and still happens to me.  I believe that every author, when he or she creates a main character, especially a series character,  can’t help but give that character a few of their own characteristics.  That happens simply because it is easier for us to write about something we know.  So, if I like rock music, for example, it is easy for me to say that my main character also likes rock music.  When I mention it in a novel, I am very at ease with it, no research is necessary, and it makes the character sound natural.

I must admit that I have lent Hunter several of my own personality traits, and that’s why it is so understandable that some readers confuse Chris Carter with Robert Hunter.  But when it happens, I, very politely, explain that unfortunately, the two aren’t the same.

What jobs did you have before becoming an author? Have any of these jobs influenced your work?

While I was in university I worked in just about any job I could get – barman, burger flipper, exotic dancer in a male show group, gym assistant, etc.  After I graduated, I became a Criminal Psychologist, working cases for the District Attorney’s office.

Yes, all of my books call upon the experiences, and the things I saw and studied during that time.  It is no coincidence that Hunter is also an ex-criminal psychologist.

When I left the psychology profession, I became a rock guitarist.

We love to hear how our writers write, so here are a few quick-fire questions:

Day.  Night is for partying.

Whiskey or wine? Coffee or tea?

Whisky and whiskey.  Wine puts me to sleep.  Coffee, for sure.

Silence to write, music for everything else.

Keyboard.  My handwriting is awful.

Hannibal, for his mind.

Alex, for his coolness.

What were your favourite childhood reads?

The truth is that I didn’t really read much when I was a kid, but I guess that the first book I read that really got me into Crime Fiction was a book by a Brazilian author called João Carlos Marinho.  The book was title: O Genio do Crime, which translates to The Crime Genius.

What is it that draws you to writing such dark crime fiction?

I think it all comes from my days as a Criminal Psychologist.  As I’ve said, I do draw a lot from all my experiences and things I saw.  But believe me, reality is a lot darker and stranger than fiction.  My novels are very tame compared to some of the cases I worked on.

You’re sold in 14 languages, and are a bestseller in Germany and Denmark. Did you expect your work to do so well in translation?

No, I never expected my work to be so well accepted in so many countries, and I am very honoured and humbled that it is. I do love receiving copies of any of my novels in a different language.  It’s quite surreal, but extremely satisfying.

What was it about the Darley Anderson agency that made you feel we were the agency for you?

When I finished writing my first manuscript, I read an interview with Martina Cole.  In the interview, she highly praised her literary agent, Darley Anderson.  I remember thinking how fantastic it would be to have someone so good representing me.

Well, I don’t really think that there is a secret to writing a book.  What happened to me was exactly the same that happens to so many people.  I woke up one day with an idea for a book that I thought was good.  The difference probably is that I did write it.  A lot of people say that they would love to write a book, or that they  have a good idea for one.  The only thing that is missing is the writing itself.

The only advice I can give any aspiring writer is to actually sit down and write the book.   Forget about rules, or creative writing classes, or anything.  Just write the story in the way that YOU think it should be told – remember – it’s your story.  Tell it in the same way that you would like a story to be told to you.  TRUST YOUR GUT.  When you finish it, read it back.  If the story excites you, then chances are it will excite others as well.  That’s exactly what I did.  I had no experience.  I had never even written a short story before.  I simply sat down one day and started writing this idea I had.  It became The Crucifix Killer.

The Death Sculptor by Chris Carter, published by Simon & Schuster, is out now.