Alex Barclay, creator of the spirited and complicated FBI agent Ren Bryce, has turned her hand to the world of children’s fiction. To celebrate the publication of THE TRIALS OF OLAND BORN: CURSE OF KINGS, we had a sneak preview into this fantasy world where hybrid animals are many and normality and routine are banned!

The first instalment of your brand new series has just come out. What can readers expect from CURSE OF KINGS? 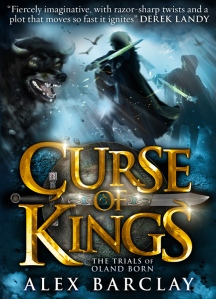 And how did this change come about? The Ren Bryce books are serious, gritty and scary crime thrillers, and Oland Born is for children (although it’s actually very gritty and very scary!). Was this move something you’d been thinking about for a while or did you have a sudden epiphany?

It was a sudden ephiphany five years ago, then I set aside the initial broad strokes, swapping them for the world of the NYPD, then the FBI. Three years ago, between Ren Bryce novels, I decided that the time was right to return to it and finish it. I continued to have ideas for Curse of Kings throughout this time, but I just filed them away and worked on each draft between crime novels.

Without giving too much away about their deepest darkest secrets how would you describe Oland and Delphi? How did you come up with them?

Oland and Delphi appeared in what I can only describe as a magical way. Oland is a fourteen-year-old servant from birth to The Craven Lodge, a band of fallen warriors who overthrew a benevolent king to take over Decresian. Oland is bullied, he is uncertain, he is untrusting, but he is brave and he is kind. Delphi is beautiful, spirited, brave, adventurous and considerably more trusting than Oland. She has lived a cosseted life, but in a different way to Oland. And yes, both have deep dark secrets…

And those monsters, the Drogues…

As the ancient myth of the drogues goes: “One mythic beast was four engulfed: vulture, bull, bear and wolf.”

I was captivated by the combination of their traits, and I loved the idea of creating my own myths within Curse of Kings and creating books within books. Oland has a secret room in the castle where he can retreat from his savage masters. The room is filled with the rescued culture of the castle, including a volume called The Ancient Myths of Envar (the land where the Kingdom of Decresian lies). Drogues are said to roam the black shores of Curfew Peak, an island where criminal children are sent.

How different is the writing process, writing for children? For instance have you kept the same habits or routines that you had when writing the adult crime books?

Most of my habits and routines changed for Curse of Kings, mainly because it was a world created purely from my imagination. The story was linear, unlike my crime novels, where I interweave any number of subplots. I wrote chronologically for Curse of Kings, which I don’t normally do. I also had to create family trees, maps, in-depth backstories, hybrid creatures, everything. It was an incredible, vast undertaking.

Will you continue to write Ren Bryce?

Oh, yes. I love writing Ren. I’m currently working on the fourth instalment, which is bringing Ren together with her best friend, Cold Case detective, Janine Hooks. They haven’t worked together before and I’m loving that dynamic.

When you’re writing, do you prefer a pen or the keyboard?

Always the keyboard. I can barely write a thing long hand. It’s appalling, I know.

What do you find is the worst thing about the writing process?

Deadlines, though I accept that they are a necessary evil. I hear my editor and my agent laughing. Not in a good way…

And what do you enjoy most about the writing process?

Being inspired is an amazing feeling.

Do you have any rituals you must perform when writing? Or when you’re about to deliver a new manuscript?

I always have a scented candle on my desk, two very specific pens I take notes with, an A3 artists’ sketchpad. I have to start the day with coffee and I have to eat my breakfast alone at my desk. As for delivery of a new manuscript, it is THE most anti-climactic moment EVER. You’re invariably at home, alone, and you email it off. Then you wander around the house, discovering that your world has not in anyway been altered. Then you sit on the sofa, and text your family and friends that you’ve sent in the manuscript and they text you congratulations. That is the best part. Then you do the laundry.

What do you like doing when you’re not writing?

Cooking, eating, reading, boxing, playing with my nieces and nephew/my friends’ kids, watching movies. I’m very selective about what I watch on TV, I never channel surf. I record most things, because I can go for quite some time without watching TV, then I can watch lots in a row. Depending on the time of year, I watch Borgen, Spiral, brilliant Irish crime drama, Love/Hate, The Good Wife, Revenge, Modern Family, Hart of Dixie. I have just come to 30 Rock late in the day and I love it. Boxsets are the writer’s friend slash enemy.

Do you have a favourite author or book?

Oh, so many. Daphne du Maurier, Jim Thompson, Alexander McCall Smith, David Sedaris, Declan Hughes, Megan Abbott. My favourite new author is Donal Ryan, who wrote The Spinning Heart. It is a flawless book. Everyone I have bought it for or recommended it to has loved it. It’s racking up awards.

I really don’t feel guilty about doing anything that is pleasurable. Should I feel guilty about watching hours of American Idol? I don’t think so. I feel lucky, though, that I’m not drawn to any of the more hideous reality shows. I can not do bitchiness, fighting, snideness, snobbery, humiliation, clinical dimness, skin the colour of wood stain. Why do people want to watch meanness? It bewilders me.

What are you reading now?

What inspired you to start writing initially?

The ideas that came to me.

What would be your top tip for aspiring writers hoping to get published?

Finish it! I am amazed at the number of people who don’t finish a book and it will be an eternal regret. A book is unperfectable before you submit it; an editor will always want to tweak it, and every reader will have a different opinion of it: nothing you do at pre-submission stage will change this fact. We’ve all been there, where you love a book, tell someone about it and they say “Wow – I just couldn’t get into it”. I’ve got emails from a reader saying “I loved XYZ” about your books. And the same week, another reader will email and say they hated the exact same thing.

The longer you hold on to a manuscript, the worse you will think it is and the more disappointed you will feel. Just go for it – no-one’s going to die.

The Trials of Oland Born: Curse of Kings, published by HarperCollins Children’s Books, is out now!